Create an Account - Increase your productivity, customize your experience, and engage in information you care about.

Frank M. Cary was born in Detroit, MI in 1858. He was the son of Captain Charles H. and Eliza (Owen) Cary. His father owned a line of tugs that operated in the Great Lakes.

Married Life
Mr. Cary moved to Lafayette when he was in his early 20's. In 1892 he married Jessie Levering. Their home was located on Sixth Street and was built by Mrs. Cary's father, Abraham Levering. They had a son, Franklin Cary, who died on September 5, 1912 when he was 19 years old and preparing to enter Purdue. Mrs. Levering died on July 24, 1927.

Retirement
After retiring, Mr. Cary focused on philanthropy. On June 18, 1927, Mr. and Mrs. Cary gave Purdue University $50,000 for construction of a men's dormitory, Cary Hall, in memory of their son. In December of that year, Mr. Cary gave a 44-acre farm east of Lafayette along Wildcat Creek to the Boy Scouts for a future campground, known for decades since as Cary Camp.

Legacy
Mr. Cary died July 7, 1936. His estate, valued at over $200,000 went to several Lafayette organizations, including Purdue, the Boy Scouts, Cary Home, the 2 local hospitals, and the YMCA. At his death his nearest surviving relative was a nephew, Beverly Cary of Detroit, Michigan. Surviving cousins were Philo Wright of Detroit, Evelyn Wright Hallett of Detroit, and Virginia Wright Collier of Pontiac, Michigan.
Cary Home for Children
On December 11, 1929 Mr. Cary donated funds for the Jessie Levering Cary Home for Children, named in memory of his wife. The home was dedicated on November 31, 1930. Until 1972 Cary Home operated as an orphanage, housing boys and girls with bad home lives. The Home later became a residential treatment center for adolescent boys.

In 1966 a group of women known as the Cary Home Auxiliary worked to change the face of the home. The auxiliary funded a $21,000 redecoration project through its own fundraising efforts. Names of those who held leadership positions in the Auxiliary are on file at the Tippecanoe County Historical Association. 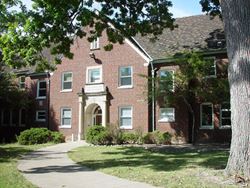 Patty Robinson
A newspaper article from 1998 features Patty Robinson of North 15th Street in Lafayette. She has written a book, "Home Away from Home, My Life at Cary Home" which can be found in the Indiana Room at the Tippecanoe County Public Library. Patty, her brothers, and her sisters were separated from their mother and sent to Cary Home when the facility operated as an orphanage. Although her story is a sad one, she describes the facility as a "good place to grow in spite of the hardships caused by family separation."
GIS Website